What Sushi Rolls Are Gluten Free? 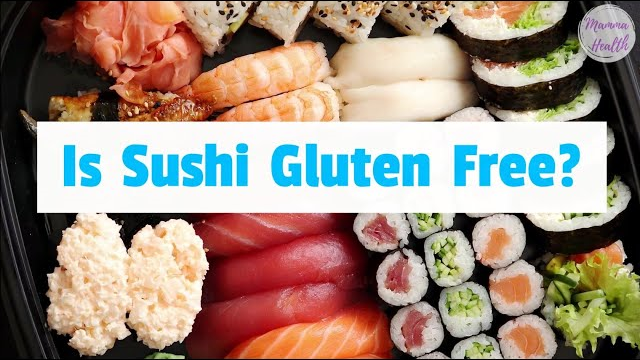 The Comprehensive Guide To Gluten-Free Sushi Sushi is a welcomed gluten-free option for many individuals with Celiac disease. Certainly, they can enjoy the dish without fear of becoming ill. Nonetheless, it is not so simple. Despite the fact that sushi is naturally gluten-free, some restaurants may add inexpensive gluten-containing ingredients.

In addition, there is a risk of cross-contamination if basic ingredients such as soy sauce are carried over unintentionally during preparation. Let’s take a look at some of the most common foods served in Japanese restaurants and determine how you can make informed decisions to avoid being served gluten.

Sushi is the most popular dish in most sushi restaurants. Again, it is gluten-free by nature. It consists primarily of rice, fish, and vegetables. However, soy sauce cannot be used because it contains wheat, unless it is gluten-free. Due to the use of wheat flour, battered and deep-fried fish or vegetables are referred to as tempura-style.

It is safer to use only plain rice. And while vinegar is typically derived from rice, which is acceptable, barley can also be used to produce vinegar. Now, seaweeds or nori; sushi nori is gluten-free so long as no additional flavorings, such as soy or teriyaki sauces, were added.

Then what should you consume? For one, sashimi is safe. So are Masago/Tobiko, King Crab, nori, vegetables. Also Rainbow Rolls, California Rolls, and simple rolls like tuna and vegetarian. Inquire with your server about gluten-free options, or get creative.

See also:  What Does Sushi Look Like In Japan?

Which gluten-free sushi options are the best?

Sushi Rolls That Can Be Ordered On A Celiac Diet – As previously mentioned, you must be cautious about which sushi is gluten-free and ensure that gluten does not sneak in undetected. If a California roll contains crab meat, it is the best option. Ensure that the chef prepares sushi with gluten-free soy sauce and rice-derived vinegar.

The Rainbow roll, an inside-out sushi with raw fish toppings such as tuna, halibut, yellowtail, and salmon, is an additional gluten-free option. Request that the chef replace the imitation crab meat with real crab meat or avocado. King Crab roll is another gluten-free and delicious option. Included in the ingredients are King crab, cucumber, and avocado.

Tell your server to omit the mayonnaise and sauce unless gluten-free sauce is used. When preparing sushi at home, you can experiment with different variations in order to enjoy this delectable dish without making it tasteless or having to deal with the associated symptoms.

Therefore, you should avoid sushi with a marinade or sauce unless you know for certain that it was prepared with gluten-free soy sauce. Wasabi, the eye-watering green paste that adds a serious kick to sushi, must also be avoided. Many sushi restaurants (especially in the United States) substitute horseradish, mustard, and other ingredients for authentic wasabi (including green food coloring).

Occasionally, wheat starch can be one of these additional ingredients. This is uncommon, but it does occur on occasion. To avoid this, you should inquire about the restaurant’s wasabi product’s ingredients or, better yet, bring a small container of your own 100% authentic wasabi.

Gluten-Containing Sushi – California rolls, particularly those from supermarkets or less expensive “fast food” sushi restaurants, almost always contain surimi or imitation crab in place of real crab. This imitation crab is created by pulverizing white fish, binding it with starch and other ingredients, and then flavoring it to resemble crab meat.

See also:  What Are The Orange Balls On Sushi?

Do not order surimi unless you are certain the sushi restaurant has experience preparing gluten-free sushi. Be wary of sushi rolls that contain tempura-dipped vegetables and meats in addition to surimi. Wheat flour is almost always used to make tempura batter.

To learn more about what sushi is, please visit our page. There are three essential components of sushi: rice, nori, and the main ingredient, which may be fish, vegetable, or fruit. Its Rice The rice is the most important component of sushi; there are two types of rice used in all sushi, the most common of which is white sushi rice, which is made by mixing cooked white short-grain rice with sushi vinegar.

See also:  What Is Masago On Sushi?

There are restaurants that use imitation ingredients and inexpensive substitutes in their cooking and may use regular white vinegar or another non-gluten-free concoction. If you are unsure about the type of vinegar a sushi restaurant uses, you should be more concerned about the fish ingredients and avoid eating there.

First, the obvious: all raw and unprocessed fruits and vegetables are gluten-free. Regarding the remaining ingredients, which consist primarily of fish and seafood, any real fish (white tuna is not a fish; it is a processed, pressed, and bleached product) is gluten-free, including salmon, tuna, fluke, striped bass, and any other fish.

Spicy tuna, spicy salmon, spicy crab, and the like are a bit tricky, as most spicy rolls contain tempura flakes, which are not gluten-free. However, the remaining ingredients are gluten-free, as they consist only of the main ingredient and spicy mayonnaise.

What Sushi Has No Fish?

What Is The Best Sushi For Beginners?